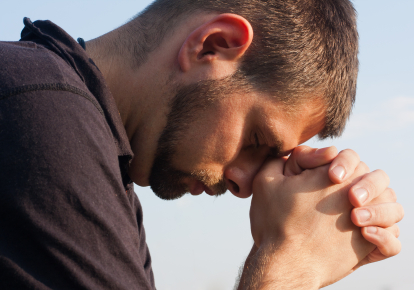 I’m an atheist and I’m dating someone who is strongly religious and we’re getting serious. But in his religion it is unacceptable to be with someone who doesn’t believe in God and he told me that betraying his religion is killing him every day. We love each other. Is there anything that we can do to make this work?

Welcome to Let’s Get Real! Today’s episode is about Dating and Religion.

Claudia from New York writes: “I’m an atheist and have many positive values that are shared by major religions but I don’t believe in God. I’m dating someone who is strongly religious and we’re getting serious. But in his religion it’s unacceptable to be with someone who doesn’t believe in God and yesterday he told me that betraying his religion is killing him every day. There’s no doubt that we love each other but I’m beginning to fear that our religious differences cannot be overcome. Is there anything that we can do to make this work?

Claudia, this is really tough because you love each other and so you want your relationship together to work but he also has a relationship with God and and his religion, so this is not going to be an easy one. And that he says that this is killing him is a big sign. It’s a big red flag. And to us it points to a requirement.

So Requirements are absolute deal-breakers, and Needs are not necessarily the reason to break up, but they are the difference between happiness and unhappiness. You’re happy when your Needs are met, and you feel an issue, or you have a problem of some kind if your Need is not met. But it’s not going to cause you to leave your relationship. And then Wants, you know, Wants are the icings on the cake. Gee, I’d like some chocolate ice cream today. Vanilla would be fine. So Wants, are enjoyable and provide pleasure and excitement, but they don’t necessarily make your life or your relationship work.

So when you choose a relationship when you’re dating, you want to keep all 3 of these in mind but you especially want to know your requirements are and make a choice that is in line with your requirements. So, is being of the same religion or believing in God a requirement here? Well, and it is for some couples or some people and it’s not for others. But it sounds like to your boyfriend it really does sound like that’s a requirement. Right and you know maybe you can have a conversation about that and use this paradigm. Use this way of talking about it and thinking about it, that there is a such thing as requirements and love is not enough to make a relationship work. You can be in love and you can love this person dearly and they can love you dearly but it doesn’t mean the relationship is going to work and that is a match.

So, there is what we call a “round pegs in a square hole” syndrome, that you know is close but is just not a fit. No matter how much you love this person and no matter how much you want it to work. A lot of times people will try and change either the round peg or the square hole, right, they’ll try and change the shape but, that really is a problem because people really can’t change often on this. Requirements are often part of who you are and here’s a great example, I mean could you choose to believe in God? You could probably choose to convert to his religion but would it be who you are? And would it work for you? And could you do so with integrity, and feel good about yourself in the relationship. So, requirements tend to be deep into our core as to who we are. And you can’t really change who you are. You can’t expect somebody else to change who they are for you. So it’s quite dangerous to try to change requirements, try to you know, give up a requirement because, if you choose to let go of it, like in this situation, you know, get married anyway, chances are it will continue to kill
him. And chances are it’ll continue to not work for you. So even if you choose to ignore the requirement and move ahead with the relationship, the relationship is doomed! It just won’t work. Trust me I’ve been there. So you may need to think about moving on from the relationship. And people, that actually is a way to show your love for each other, because if you do love each other like you say, you’re in love, you want what’s best for him. He wants what’s best for you. And if it’s not the two of you together, then that really would be the best thing, and a way to honor your love. You know the saying if you love
something set it free. And really for him to get what he really wants and needs in a relationship long-term, it’s probably not with you. And the same for you.

Now we would be re-missed if we didn’t mention another option. A last option, to consider, anyway, which is, you could do nothing and give it time. It might work itself out. Sometimes, things change, people change. We know that things never stay the same, so it’s quite possible to do nothing and things will change all by themselves but two considerations about the strategy. The first is, how long are you willing to invest in this relationship before you decide that it will or not work in the long term? Chances are you should give the decision a deadline of some kind. Even write it down on your calendar. So if you do nothing, I definitely recommend that you don’t do nothing forever. That you do set a deadline of some kind and see if things change on their own. Because really there’s no relationship emergencies, so you can leave things exactly the way they are and see how it goes over time, knowing that things do change. So in that time you really could maybe explore his religion, maybe just see if maybe that would work for you and maybe you’ll become a very spiritual person as a result. The other thing about doing nothing is you have to let it evolve. You have to truly do nothing. It doesn’t mean you spend that time trying to change him or change yourself. So you just keep the relationship exactly as it is and see where it goes. If you are in a committed relationship, like if you’re married, then doing nothing is quite a valid strategy because even if you are at the end of the rope and feel like a divorce, chances are you give it another year or two or three or four or five and it will change. And it won’t be exactly the same as it is now when you’re feeling at the end of your rope. But, before you make a commitment, in our opinion, that is the time to make a good long term choice, and you have a lot of choices in your life. It doesn’t have to be this person, no matter how much you love them, no matter how much you really want to make it work because love is not enough for a relationship to work.

If you have an idea, a suggestion or a comment for Claudia, please enter it in the comment box below. Let’s help her decide what to do with her relationship. And please do remember that, telling the truth has consequences. It really is the only way to have a fulfilling relationship but not all relationships can handle the truth. So if this is your situation Please do get the support that you need from a qualified therapist, counselor or a coach. No one is successful alone and just a little bit of support can go a long way in getting you to live happily ever after. So thanks for watching and bye for now!