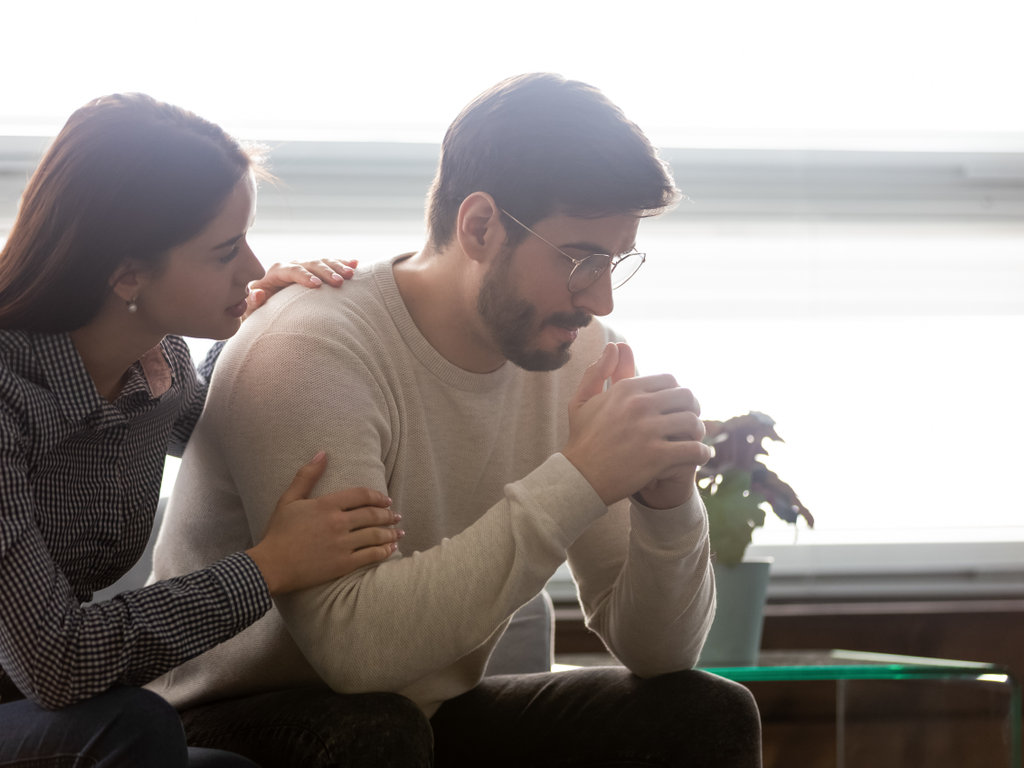 They’ve been married for two years and she had zero libido due to pregnancy, depression and stress. Now that she’s feeling better he’s angry and withdrawn for not having his needs met. What can she do?

Carol from Columbus writes:
My husband and I have been married for two years. Due to a variety of circumstances like pregnancy, stress, misunderstandings and depression, I haven’t had much libido in quite awhile. My husband has talked to me many times about feeling rejected, not just sexually but in general. I’ve let this go so long that now he’s angry and resentful. How do I go about reconnecting with him, feeling passionate again and salvaging our marriage?

So let’s get real Carol. It sounds like your husband has been feeling rejected for the past few years, especially in the early first two-years of your marriage and he’s angry and he’s withdrawn, and at this point even if you are different and want things to change or work as hard as you can, it’s not going to change his feelings. Feelings just don’t go away. They take on a life of their own. When you’re feeling angry, when you’re feeling resentful, you just can’t turn it off like a light switch. But the good thing is that it sounds like you realize that you’ve played a part in his feeling this way and you want to do something about that now.

So, we have a few things for you to consider. The first is, have a heart-to-heart talk with your husband. Just lay it all out there, tell the truth, tell your truth about what you’ve been through, what you’ve been experiencing, you feel bad about it, you want to change it, what your intention is and take responsibility for your part in it.

But don’t be defensive. Tell your truth in a way that you’re speaking from your heart and you’re telling him how your feeling and what your intentions are, but don’t argue with him, don’t try to change the way he’s feeling or thinking. But don’t take responsibility for his feelings; it’s not your fault that he’s feeling this way. Somebody else in the same situation, they could be feeling a different way. So, it’s, simply his response that he’s feeling this way. It’s his response. It’s not necessarily your fault.

On the other hand, don’t try to change his feelings or reality. It drives people crazy. I’m sure that it will drive you crazy if he tells you, “No, don’t feel that way.” You know, “Feel this way.”  So please do accept his feelings, accept his reality. It doesn’t mean you agree with it, it doesn’t mean that you think it’s all your fault, although you did have a part in it. And you’re not making him wrong for feeling this way, which is very important.

So what do you do? Ask him what he needs to get past this and what you can do to help change it. You could tell him that you have the intention to connect with him again and get your marriage back on track and have lots of sex. And ask him if he’s willing to work with you on that.

We highly recommend that you watch our program Radical Intimacy together. It’ll help you learn how to build trust and connection with each other and develop a deeper emotional and spiritual connection and be closer, and be able to tell your truth to each other, good and bad.

So, at this point you know, what do you do? So hopefully he is willing to talk to you about that, but if he’s not, you’re gonna have, well, what we see is three choices to make.

The first one is continue what you probably have already been doing and that is making repair attempts, but you’ll just need to be patient about that.

The next is just give him time. You know, it might just take him some time to come around. Time heals all wounds or wounds all heels or, you know, if nothing else, things do change over time. Things do not stay the same, although it might be like it’s going to be this way forever you know it won’t. So sometimes just giving him time might help.

And if that doesn’t work and you’ve tried everything that you can, then definitely get help. Get the support you need. Sometimes it just requires outside support to break the log jam in your relationship.

So please, if you’re watching this video and you have an idea suggestion or comment for Carol please enter it in the comment box below. Let’s help her deal with her husband feeling angry and resentful for being rejected for the first two years of his marriage.

But also, please do remember that telling the truth has consequences. It’s the only way to have a fulfilling relationship, but not all relationships can handle the truth. So, if this is your situation, please get the support you need from a qualified therapist, or counselor, or a coach. No one is successful alone. Just a little bit of support can go a long way and helping you live happily ever after.

Thanks for watching and bye for now.