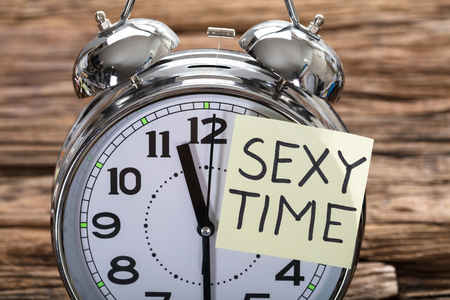 He works 12-hour days and is exhausted when he comes home from work but she wants spontaneity and doesn’t want to schedule their sex life.  What should they do? Can appointment sex be good sex?

Transcript:
Ingrid from Rochester writes: My boyfriend works 12-hour shifts and is exhausted when he gets home late at night and is not in the mood for sex. When I ask him when we’ll make love he says, “Maybe tonight” but it never happens. I don’t want to have scheduled sex, I just want it to happen, and not when I’m half asleep. Please help me.

So, Ingrid, Let’s Get Real about sex. Well, the first thing is, you know, people don’t get to have sex every time their aroused. Right? I mean, if they did we would have see people having sex on the bus or at the library. So there’s no such thing as truly spontaneous sex. You just can’t have sex whenever, or however or wherever you want. And I’m wondering also Ingrid if you’re wanting to have sex when it’s right for you and maybe not necessarily when it’s right for your boyfriend, because you said you want to have sex but not when you’re half asleep. So is he initiating some contact while you’re kind of half-asleep? If so, then you can’t just have sex when you want to have sex and not accommodate when he wants to have sex. Yes, any relationship generally goes back-and-forth because it’s rare that you have exactly the same schedule, exactly the same timing, on everything.

So, there’s always going to be a bit of back-and-forth and give-and-take around sex and when or how to have it. Also partners need to work together to make sure everybody’s needs are met and that’s the sexual needs of course, but, you know, you’re rest and relaxation needs too. So if he’s been working 12-hour shifts, I would imagine he is pretty tired when he gets home and you know, you want to take that into account and find a time that works for, you know, works for both of you. And that to me is the most fun conversation to have in a relationship. How about, “Honey, when can we have sex? Let’s negotiate that.”

And Ingrid, there’s one more thing I want to offer to you is that your attitude might be holding you back from enjoying some really great sex because if you’re not thinking that appointment sex can be great sex I think you might want to reconsider that.

A great relationship including a great sexual relationship is all about talking, negotiating, conversations expressing your wants and needs, your partner’s wants and needs, and they require some effort. When you’re young and you’re horny, often, it’s just, you know, “Wham! Bam! Thank you Ma’am!” and it all comes very, very naturally but the longer you are in a relationship and the older you get or one of the other or both,  you need to talk more. And you need to identify what you needs are and talk about them with your partner and identify what his needs are and talk about them and see both needs are met. Sometimes you need to be pretty creative! But that’s the fun of a relationship, that’s the fun of sex, is getting creative! Let’s talk a bit about how you guys can get creative in your sexual relationship.

Well, first of all appointment sex. Okay, don’t call it scheduled sex. Don’t call it appointment sex. Call it “Dates!” Yes, dates. Or find another word that works for you, something that speaks to you. “We’re gonna have a date tonight!” So, I mean, there are some really good things about date sex. First of all, you’re gonna have sex. You know it’s guaranteed. You know that going to be on the agenda for the day. As a guy, I love it! Guaranteed sex! Another thing is, you can be prepared and present for it. Sometimes it’s really hard if you’re a multi-tasker and you have a lot of things in your head, it’s hard to just drop everything and have sex and be really present for it. So, if you know it’s gonna happen, you can plan ahead and make sure that all the important things on your to-do-list are done, and turn the phone off, so you know it’s not going to ring. You can just be really prepared for it. Yes, you know, that’s the downside of spontaneous sex, chances are that one or both of you is not really in the mood in one particular moment, that there would need to be a build up towards that, and we have a name for that. It’s called “foreplay.” And there’s a similar concept called “seduction.” So, if you have a date then you can anticipate it, you can look forward to it, you can plan for it, and get all sorts of wild ideas about what you gonna do and build yourself up. And also there’s lots of things you can do to kind of flirt and seduce each other so that by the time the date comes, you’re going to be so hot and ready to go that you won’t mind that it is scheduled.

Would you like to share with Ingrid about your idea about Passive Sex? Yes, I actually would ingrid. Another thing you might want to consider is seeing if your boyfriend would be up for passive sex. And what I mean by that is if he comes home from that 12-hour shift and he’s exhausted and he doesn’t really want to you know, go wild and crazy, he may still be willing to lay down and just relax while you do your thing. On the other hand, you don’t like it when he wants to have sex and you’re half asleep. Well, if we think of it as passive sex and think about as kind of a gift that we give to our partner, then, you would just let him have sex and ravish your body when you’re half-asleep. And you can do the same with him, that when you’re aroused and you’re horny and you really want to have sex spontaneously then you can go ahead and have passive sex with him too. It doesn’t require his participation. He doesn’t have to have a lot of energy. He can even be asleep and most guys would welcome their woman initiating passive sex even if they’re tired. Yes, so really, I think really all that’s important for that is to just hold a safe space for it. So, yes, I’m just gonna be laying here but you know, you go for it.

And that is probably something best talked about. So going back to what we said earlier, the conversation around your sex life and negotiating it and planning for it, those are the most fun conversations you can possibly have in a relationship.

So, Ingrid, very good luck to you. And if you’re watching this and you have a comment or a question or you have some ideas that we haven’t touched on, please put them in the comment box below. So thanks for joining us and bye for now.